Earthing And The Global Electrical Circuit

When I set out to write this article about Earthing and how it relates to the Global Electrical Circuit, I wanted to convey a very SIMPLE understanding of how the Free Electrons on the surface of the Earth get there; and REVEAL their source.

I thought this would be good to understand, because it’s these free electrons that provide so many benefits to us as a consequence of grounding ourselves to the Earth.

I didn’t realize I was diving into the study of a branch of science that the scientists can’t YET explain completely.  If you’ve got a degree in atmospheric physics you might like to read the document I extracted most of my basic understanding from.

I’ve linked to that document at the Earthing Institute just for You!  Click Here to read that detailed understanding.

If you want the VERY basic version of the understanding then read on.

Earthing is one of the most amazing forms of what some people refer to as ENERGY Medicine.  The electrical charge of the Earth’s surface is where this medicine comes from, and all you have to do is get your bare skin in contact with it to benefit.

You can read about some of the benefits of Earthing in a recent article I wrote titled What Is Earthing?

So..Where Do The Free Electrons on the surface of the Earth come from and what’s the source of their supply? 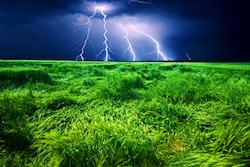 Circuit.  The primary generators of this NEGATIVE Earth Surface Charge are thunderstorms.

As a storm cloud develops it creates a positive charge on a region of the normally negative surface of the Earth below it.

It’s believed that the movement of ice particles and water droplets within the cloud create a separation of charge between it’s top and bottom, with a difference as high as A MILLION volts; The top of the cloud being positively charged and the base being negatively charged.

When differences in charges reach a CRITICAL level, something called ionization occurs between the charges.  This means normally non-conductive elements in the air are transformed to ions which are conductive.

This air conductivity creates a channel for the electricity to discharge itself in the form of lightening; and it may take several flashes to completely discharge the cloud.

It’s believed these thunderstorms are constantly moving negative charge to the surface of the Earth and positive charge back up in to the ionosphere (in the upper part of the the Earth’s atmosphere).

The current spreads out over the globe and maintains this difference in charge between the positively charged atmosphere and negatively charged surface of the Earth, even in areas where the weather is good.

This cycle is the Global Electrical Circuit and it’s been estimated, if all thunderstorm activity suddenly stopped it would take less than an hour for the Earth and atmosphere to lose their difference in charge; leaving us with no FREE Electrons from the Earth to benefit our health.

Did you know this difference in charge between the atmosphere and the Earth’s surface creates a powerful electric field called the Fair Weather Electric Field?  The only reason we don’t feel it is the air in our lower atmosphere is not very conductive in FAIR weather conditions.

Watch out in a THUNDERSTORM though!  If you notice the Hair of people around you is standing on end, Run for Cover.

There are other factors that influence this global electrical circuit; and even create a slight change in the Earth’s electrical potential over a 24 hour period.  If you want to get all of the details, you can read The Earth’s Electrical Surface Potential ~ A summary of present understanding, by Gaetan Chavalier, PhD HERE!

IF you are prepared to be FASCINATED, have a listen to a Free Audio of The book Earthing while it’s still available. This audio is not available anymore.

Transform Your Blood By Earthing Yourself!