Earthing Is Grounding For Health

The most amazing health discovery I know of, may very well be something you have never heard of.  If you have heard of it, and you’re not using this technology you’ll probably want to give it a try.

Earthing Grounding, is the name given to this technology by Clinton Ober.  Clint, who worked as a cable 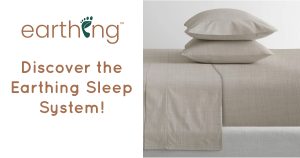 person for many years, had an insight one day while sitting on a park bench watching people walk by.

He took notice of the fact that almost everyone was wearing shoes, and were insulated from the ground. He wondered if it might have a negative effect on health.  He knew from his experience in the cable industry, in order to get a clear picture and avoid interference from multiple electromagnetic frequencies, the whole cable system had to be shielded and grounded to the earth. His insight led to the health discovery of grounding people.

This amazing discovery, which you are sure hear more about, may be viewed as one of the most profound health discoveries ever. On the cover of the book, Earthing, the subtitle is, The most important health discovery ever?

One of the most amazing benefits of being grounded is your body immediately fills with negatively charged electrons from the earth.  These electrons are equal to antioxidants and provide all of the benefits antioxidants from food give you and then some.

One of the discoveries made in studies, is after being grounded for about 1/2 hour, blood cells go from a state of what appears to be clumping together, to bouncing off of each other.  This has been observed over and over again, under a microscope, in blood samples taken from people before and after grounding.  This Zeta potential, as it’s called, is achieved by the blood cells of grounded individuals.

You can listen to the audio Earthing book at this link HERE.

In a study involving 12 subjects, cortisol levels returned to normal in 10 of the 12 people who used an earthing product during the night; 1 of the 2 people, not experiencing a change, already had normalized cortisol levels.  Cortisol, the stress hormone, is lowest around midnight and highest around 8 a.m. when it’s performing its function properly.  Its levels rise in the morning to wake us up.

The 12 participants all reported waking up less frequently, and 9 reported having more energy in the day and feeling more refreshed; 9 also reported less anxiety, stress and depression.  The previous statements are paraphrased from the book Earthing.

I’ve been experiencing earthing, first hand, with 2 of the devices you can plug into your wall at home; They connect to the ground hole, which is the third prong hole on plug outlets that have them. I have experienced the benefits of sleeping better and feeling good longer while working on my computer.

Here’s a link to the official Earthing Site where you can see how to stay grounded more often!

The only caution concerning Earthing is for people who take blood thinning medication.  They should consult with their doctors who prescribe their medication and monitor the continued need for it, as the practice of Earthing naturally thins the blood.

What I’ve written here is only scratching the service of the information in Clintʼs book, and I suggest reading Earthing.

So What Are Some Good Earthing Methods?

You can get grounded immediately, for free, anywhere you can take your shoes off and have your feet or any other exposed part of your body on the ground.  It is best in dirt or grass (anywhere you are actually touching the earth), but I  understand you can get some grounding through concrete depending on how thick the concrete is and whether or not there’s any moisture in it.

The other way to reap the benefits of Earthing, which is more practical for most people, is to purchase any number of earthing devices. Earthing sheets are my favorite, and it’s definitely in your best interest to own one.

You can also find earthing mats, earthing bed pads; in addition to little portable devices, which you can connect to your feet, hands or wrist anywhere you go, where there is an outlet you can plug into. I’m using one right now, while I am working on my computer.

The best type of earthing devices, in my opinion, are earthing sheets (grounding sheets) and earthing bed pads.  With these devices you can get grounded for several hours at a time while sleeping.  They also help improve sleep quality.  However you do it getting grounded as much and as easily as you can is the key.

The Silver Lining Of An Earthing Bed Pad